I began a Culinary Tour of the Mediterranean Sea. Many of the flavors I had already encountered during some of my other culinary challenges, but there were a few things I tried for the first time. Some, I found I liked. 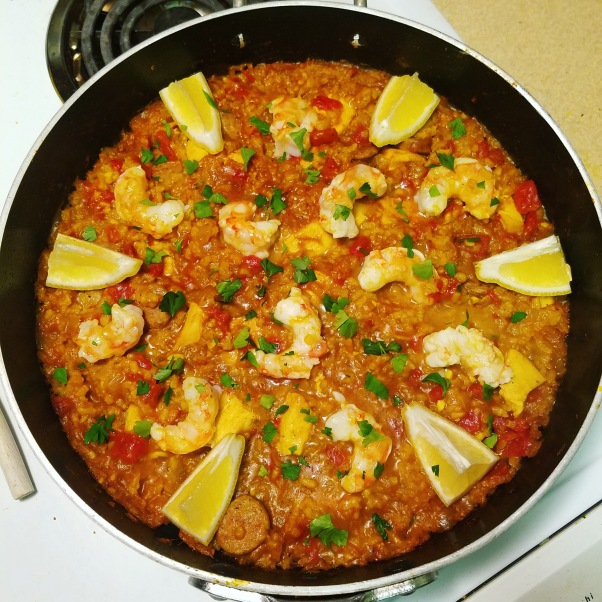 Shrimp, Chicken, and Sausage. I used Shrimp bought off a troller that goes up to Alaska, Shrimp stock made by my brother, and Paella spice mix brought back from Barcelona. It wasn’t a proper Paella pan, and I think my fear of uneven cooking caused me to allow it to get sort of gloopy. But I was able to achieve the Socarrat, which is the delicious crispy bottom.

I admittedly paid a lot of money for Lavender Honey from France. And the kicker is, you couldn’t even taste it… I did rush my cheesecake though, which is why it has sunken in the middle. But, you can’t really go wrong with a cheesecake.

Pasta with roasted Eggplant. I didn’t have alot of hope or expectation. But I loved this! 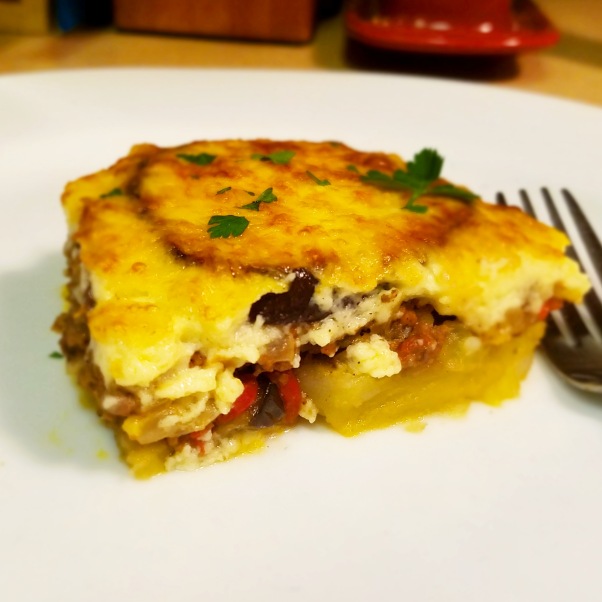 Layered Potato, Eggplant, Meat Sauce, and Bechamel Sauce, and baked. Another adventure into Eggplant. I also appreciated this. Although, I admit, with so many different elements, I really over cooked the potato and eggplant players. So they were mushy. But the flavor was really good.

Turkish Pizza. Though I saw recipes that claim you can just use store bought dough, most recipes claim you really want your dough to turn out more like flatbread. The reason being, after spreading the delicious lamb meatball esque topping (no sauce), and baking it, you then roll it up to eat it. Not slice it. The flavor turned out very similar to a gyro.

Lentils, Rice, Macaroni, slight vinegary spiced Tomato Sauce, topped with Fried Onions. I failed so hard at this. I have never cooked Lentils. I was afraid they would be more like dried beans. I over cooked them and the rice so hard. This was disgusting, and I apologize to Egypt for my epic fail… (The tomato sauce was really good though!) 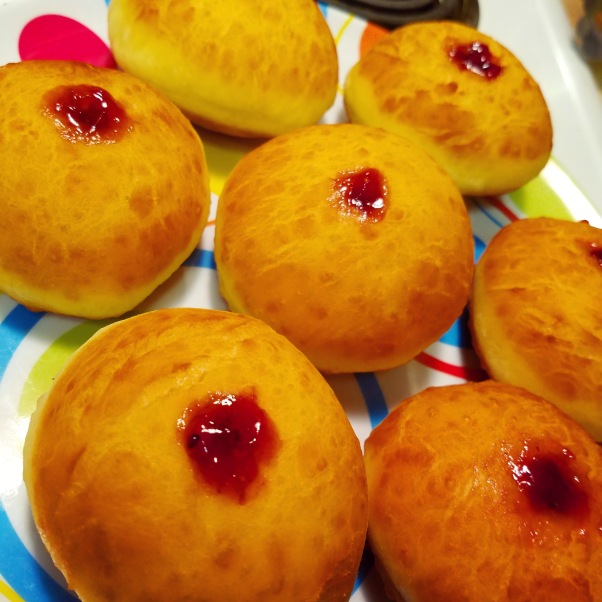 Jelly Doughnut. Also kind of failed these… as I sort of discovered when I was making my Lahmacun dough, my yeast might be dead. Also, just a note: Make sure you aren’t using chunky jam to pipe into your doughnuts. By the end, I was so messy and frustrsted, I didnt even bother A: finishing even half the doughnuts, or B: powder sugaring them…

I really felt so bad about doing Egypt so wrong. So I tried again. And I succeeded so hard! …ok, honestly, the lentils might have been just shy of underdone, but it was cool, they gave good texture. Once done well, this dish was so delicious!

Potato wedges, cut like taco shells, filles with yummy meat filling, dredged, and fried! How can you go wrong?! …well, I mean other than knowing when the A: meat was cooked thru, and B: the potatoes were soft… I had alot though, and eventually I got it figured out. So tasty, but not saveable. Eat now, don’t reheat.. 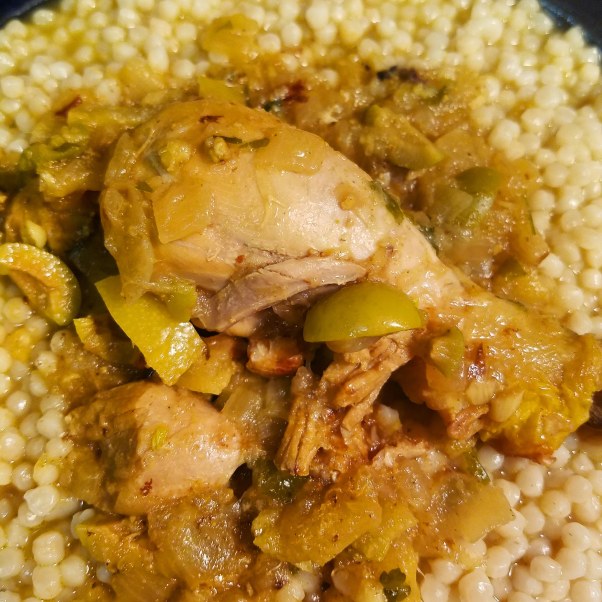 Chicken with Preserved Lemons and Olives. This was so delicious. Until! I accidentally added too much preserved lemon. Just for your information: Preserved Lemons are sooooooooooo salty! But I never saw a recipe that didn’t call for the lemons to be preserved. And I searched high and low for them. So I was going to use them damnit! They were a salt bomb to my dish. By chance I had some couscous I was able to serve it with. But next time, I might actually try just using fresh lemon…

Semolina cookies filled with spiced Date Paste. And then just quick fried on the stove. I actually really liked these. I would add more Date Paste next time, but they are not too sweet. Sweetened, actually, only with the Date Paste itself.

This happened a little out of order, but after all my hard work, I decided to reward myself with a Lebanese meal cooked FOR me. It was delicious.

I am totally and advocate for cooking at home, but indeed, sometimes it is nice to have someone cook for you.

Overall it was certainly an adventure. Some ups and some downs. Not including the extra life stuff going on around me to add to the difficulties of cooking. But I still think this is a great way to explore the world, step out of your box, and try new things, all from the safety of your own home. And, like me, you might find out you like something you thought you wouldn’t.

Extra: I managed to really bruise my thumb meat at one point. Tenacity was my downfall. I was GOING to add those preserved lemons to my dish. The recipe called for them! So, despite pain and injury, I manhandled that damned jar open. For naught… I ruined my dish, and hurt me thumb… I’m not sure what the moral of the story is…