Shes not tired, atleast not as tired as she should be. She finished the lime redbull ages ago. By now darkness had fallen and an odd mist was all around. She drove at a little less than a comfortable pace, but it was okay, the cars in front of her kept her honest. One cat on her lap, the other in the passenger seat. Some time ago her GPS had failed. It wasn’t that she didn’t know the way, having driven it a dozen times since last spring, but that the 280 mile journey felt a little less lonely. And though she knew the heavy clouds and fog probably had something to do with it, she half suspected her GPS was simply giving her the silent treatment from having been argued with so much on the trip up. Silent, save for every hour or so loudly chiming in with, “GPS signal lost!!” Rudely interrupting the soothing sound of Aaron Manhke’s voice, and causing her heart to jump more than it should. Aaron’s subject matter, half hour long podcast episodes of Murder and Monsters. It is her cup of tea, and driving thru the dark and the mist, provides for the perfect atmosphere.

Once darkness falls, the drive becomes dangerously monotonous. She suddenly finds herself traveling thru a wormhole. She might be flying thru a Stargate. And when the rain starts falling, and the cars in front of her begin spraying water at her, she might have been traveling thru hyperspace. Destination: Home.

And in those long, dark hours, one cat cutting off the circulation to her foot, soothing, but spooky tone of Aaron’s voice in the background, rain drops hitting the windshield, almost creating its own sound of radio static, she feels herself changing. Mentally morphing herself back to reality. When she reached the end of the wormhole, she would be back home. Back to life. Back to her every day.

One cat suddenly sits up and begins yowling and pacing back and forth, as though awoken from a nap and not quite sure where he is. “I know buddy,” she says, rubbing his head til he settles back down, this time on her other leg, “you and me both…” He lets out a sigh. Aaron continues his story. GPS chimes in that her signal has been lost. “You never even tried,” she says, begrudgingly. But then shrugs, soon they would be home.. 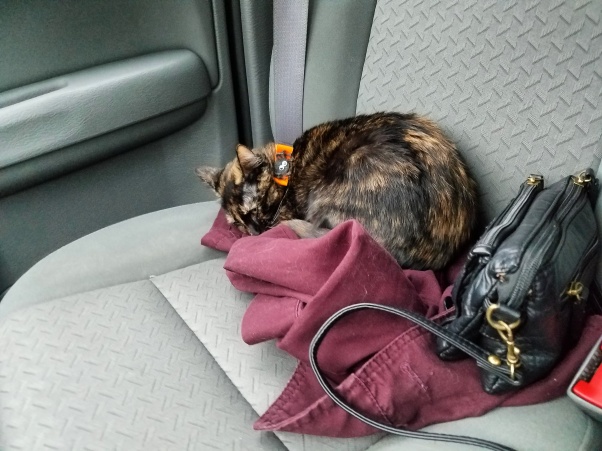