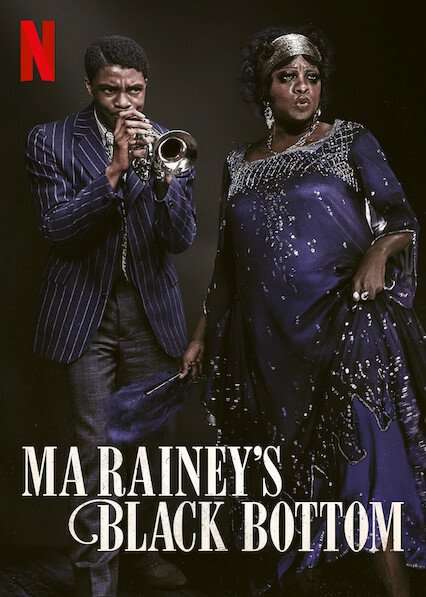 Another Black America struggle film, veiled in the jug band notes of blues music. Based on a play by August Wilson, about the real blues singer, Ma Rainey. This film plays like a stage play, with it’s various small room settings and deep monologues. The style of acting feels more suited to the stage, than the big screen.
Truth be told, the story is simple, if a little boring. I felt it hard to find myself backing any character, because they neither seemed wholly good, nor wholly evil. While they are all slightly broken from one White America experience or another, none of them seem really to be fighting for the cause. Levee, the young horn player is driven by his desire to make exciting music. With both his parents torn away at a young age, he struggles with being a proud, strong black man, and the understanding that to go anywhere in life, he needs the white man to open the door for him. And Ma, the strong woman whose unique voice has given her some recognition. Her voice is her leverage. As opposed to Levee who needs the white man to pay his ticket, the white man needs Ma to make their money. And Ma knows this.
It sounds more dramatic than it ends up being. Or maybe I lost focus somewhere. But what people will watch this film for are the two leads. Viola Davis as Ma, the large, demanding, woman with sweat between her breasts, and dark makeup smudged around her eyes. A woman who’s going to be told what to do by no one. And Chadwick Bozeman, known for being the sexy prince of Wakanda in Black Panther. This was his last film. Critics commend him for both throwing himself into his work right up until the end, and particularly this role, for literally giving it his all, because he knew he had nothing left to lose.
People will watch this film for him. He is shockingly skinny compared to his buff super hero role. But his acting is lacking for nothing. I always believe that when an actor no longer becomes recognizable to me as their real life identity (not necessarily just visually), that they have maximized their acting potential for that role. In essence, done a stellar job. And not once did I see Chadwick Bozeman acting the part of Levee, the horn player. From the very first moment he enters the screen, he simply is Levee.
He was posthumously nominated for the Oscar for Best Lead Actor. While he is up against some stiff competition, I have a fear that the Academy will feel pressured to award him. There will also be pressure to award Steven Yuen, the first Asian American to be nominated for Best Actor, now due to the growing publicity of the increased Asian Hate Crimes since last March.
Pressures aside, his role was phenomenal. A testiment to what the world was robbed of on August 28th last year. If you watch this film for nothing else, watch it for him.